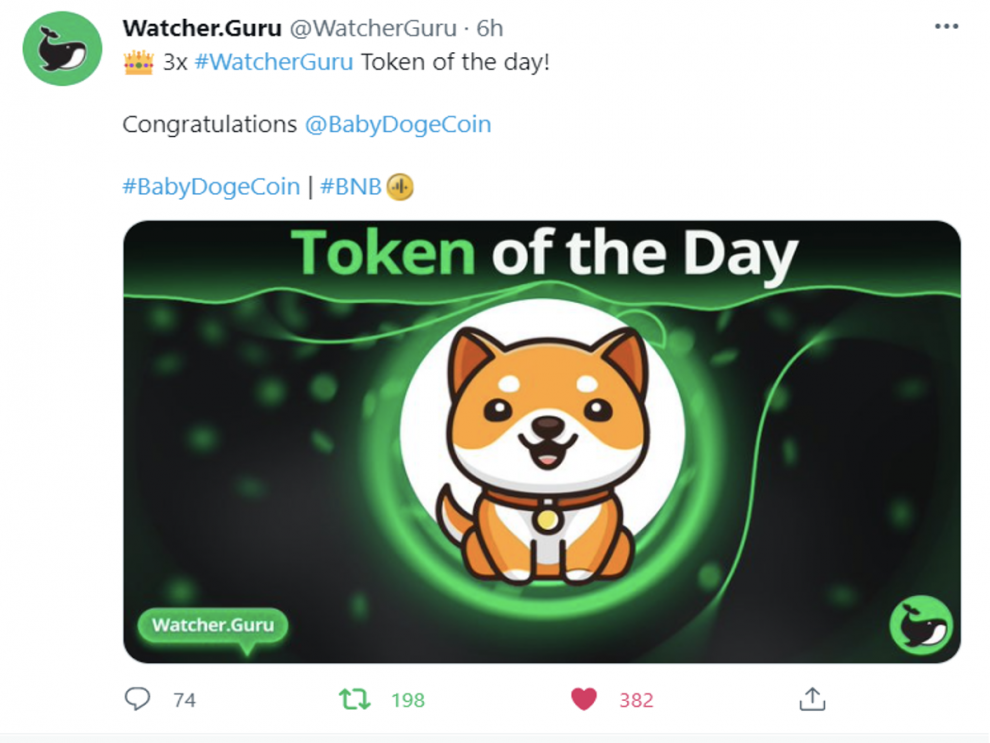 We are eager to share this latest virtual currency-related report with our readers. We believe social media following is among the important factors that can determine a cryptocurrency project’s success or failure in the market.

According to the news posted online by the online news outlet Tech Times, which delivers the latest reports on technology, health developments, and science, WatcherGuru has Binance Coin or $BNB taking the top position on its list.

The Binance Coin has a whopping 6.2 million followers on Twitter. This crypto-asset, which trades at exactly US$607.82 at the time of writing based on the trading price information posted on CoinGecko.com, has nearly twice as many Twitter followers compared to Bitcoin.

$BTC has a staggering 3.8 million followers on Twitter. Meanwhile, taking the third spot on WatcherGuru’s top 10 list of the most followed cryptocurrencies on Twitter is Dogecoin.

This cryptocurrency, which has the trading symbol $DOGE, has a whopping 2.5 million followers on Twitter. Meanwhile, WatcherGuru lists Ripple’s XRP or $XRP on the fourth spot, with 2.2 million Twitter followers.

Shiba Inu or $SHIB comes fifth with 2.1 million followers on Twitter. Ethereum or $ETH is in the sixth position with 1.8 million Twitter followers.

WatcherGuru’s top 10 list of the most-followed virtual currencies on Twitter highlights the fact that social media following and buzz can be strong signals of a cryptocurrency’s potential success. For instance, in Dogecoin’s case, Elon Musk has talked about this meme coin on Twitter.

The Tesla chief executive officer started this social media buzz that has spiked Dogecoin’s popularity and made its trading price surge massively. However, we want to point out to our readers that social media followers can be purchased with numerous bots today.

There are actually online marketplaces where cryptocurrency administrators can buy their own social buzz via likes, followers or fans, shares, and replies. We appreciate WatcherGuru’s top 10 list of the most-followed virtual currencies on Twitter.

However, we want to highlight to investors that there are certainly many other key indicators that can propel a cryptocurrency project to success or failure, not just the number of fans it has on a specific social media platform.